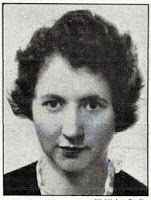 More is known about Susan Yates, Emma Lou Fetta’s fashion designing protagonist, than the author herself. Born Emma Louise Hawkins Fetta on September 21, 1898, she attended Earlham College, a Quaker institution located in her hometown of Richmond, Indiana. Initially a boarding school at its founding in 1947, a collegiate department was added in 1859. Ahead of its time, Earlham was the first co-educational Quaker college.

From 1918 to 1920, Emma worked as a reporter for the Richmond (IN) newspaper, the Palladium then moved on to the Cincinnati Enquirer where she was a feature writer. A talented journalist, she went on to work for Chicago and New York papers before becoming the American correspondent for one of the London paper and press chairman for the Fashion Group.

Information is sketchy, but somewhere during that time she met and married George Walling Minster. It is unclear how and where they became acquainted.

In 1939, she added novelist to her resume when she published Murder in Style, the first of her three books. Because of Emma’s experience reporting the world of fashion, it is no surprise she chose that as her setting. In Murder in Style, the main character, Susan, is suspected of the crime- killing of a fellow committee member, so she attempts to prove her innocence. Assistant ADA Lyle Curtis is assigned to the case, adding romantic tension to the story.

In Mystery Women, the author observed that this pairing formed the combination that became common in the 1980s of an established female professional in another field romantically tied to a male whose profession dealt with crime.

Emma Lou’s second book Murder on the Face of It, published in 1940, was chosen as a Crime Club Mystery Novel. Her third, Dressed to Kill was released in 1941. All three books are well-written, delightful cozies (before cozies became a subgenre) and received high marks from critics and readers. Why she stopped writing mysteries is a mystery itself.

Who is your favorite cozy writer?
Posted by Linda Matchett at 1:30 AM