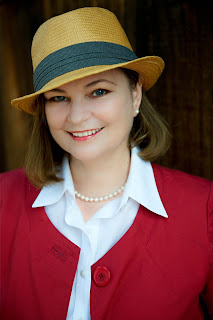 Linda:  Thanks for joining me today. Your debut novel, Grounded Hearts, was released in June of this year and is set during WWII. (My favorite time period!) Where did you find your inspiration for this story?

Jeanne: My father was stationed in England during WWII. Issued with a weekend pass, he decided to fly to the U.S. Army base in Northern Ireland, and then visit family who lived nearby. Once there, he borrowed a bicycle and peddled across the border into Eire, “Free Ireland.” A few minutes into his ride, a member of the Garda, the Irish National Police, stopped him. The officer told him to turn his army jacket inside out, or he’d have to arrest him as a combatant and send him to the K-Lines internment camp. My father did as directed and continued on his way without further incident, which was fortunate because 240 soldiers from both sides of the conflict faced internment in Ireland during the war.

Remembering the story, I started the “what if” game. The more I researched the period the Irish called “The Emergency,” the more fascinated I became, and a WWII romance between a downed RAF pilot and a feisty midwife emerged.

LM: That is fascinating. I love books based on true stories. First novels are often the result of a long journey toward publication. How did you get started as a writer, and how did you decide to seek publication?

Jeanne: Grounded Hearts is my debut novel, but not my first book. I penned five or six novels before I finally received my first contract. During this long slog to publication, I sometimes wondered why I thought writing fiction was a good idea, but when God puts something on your heart, it’s foolish to resist. 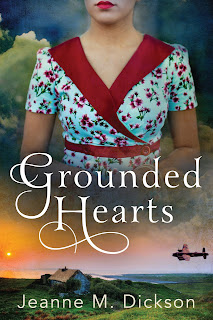 LM: Amen to that! The age old question for writers – are you a planner or a “panster,” and what is your favorite part of the writing process?

Jeanne: While I plan the novel’s journey, I allow for detours. It’s a process, and honestly, every book is a bit different. The “what if” is my favorite part and then research to back up my premise statement.

LM: Writing about a different era and culture required lots of research.What tidbit did you discover during that phase of writing that created an “aha” moment for you?

Jeanne: Ireland was neutral during WWII? What? They interned combatants? What?

Jeanne: Well, I guess I’m still doing it. I have a collection of Barbie dolls that I dress up as my characters in whatever book I’m working on. They’re my muses. And my only weakness. Maybe.

LM: How fun! What is your next project?

Jeanne:  I’m currently working on a contemporary romance. A woman falls in love with her contractor as she struggles to renovate an inherited Irish manor house, but when she discovers a buried body, it throws into question the role an ancestor may have played in the girl’s death, and the discovery of an ancient fairy ring creates friction in the town, pitting traditionalist against progressives.

LM: Ooooh. Sounds intriguing! What advice can you give to not-yet-published writers?

Jeanne: Don’t give up and don’t be in hurry. Getting published is going to take more time than you might think. Learn your craft. Find a writing community to hang out with because you are not alone. I belong to RWA and ACFW. It can be hard, but don’t be shy and go to conferences. I found many friends, my agent, and my editor at conferences.