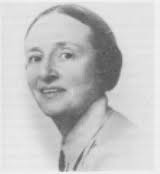 Better known in the academic world of anthropology for her research and discoveries, Ruth Sawtell Wallis wrote mystery novels. Her first, Too May Bones, was published in 1943. She received an undergraduate degree in English from Radcliffe College, after which she traveled to Europe as part of her graduate program in anthropology at Columbia University. A brilliant scientist, Ruth went on to receive her doctorate and began to teach at the University of Iowa. A year later, she married Professor Wilson Dallam Wallis, and as was typical of the era, lost her job as a result. Over the years she was able to work in her field intermittently, and she also collaborated on books with her husband.

According to her obituary written by a colleague, Ruth began to write mysteries in 1940 while recovering from a serious illness. Her books involve academic settings, and anthropology plays an integral part in the solution to the crimes. Set in a museum, Too Many Bones won the Red Badge Prize for best mystery of the year. When her novels were written, there were no “sub-genres” in the mystery book industry, however, hers may very well be the first in that now popular sub-genre.

Check out the map from the back of the dust jacket! Perhaps another first in the mystery genre.

Ruth conveys her feelings about women’s treatment in academia, especially wage differences, through her main character, Kay Ellis. Unusual for the time, Ruth also includes two African-American characters who have their own subplot. Unfortunately for readers, she only published five novels during a ten year period. The good news is they can be found for reasonable prices at any number of online sites.
Posted by Linda Matchett at 1:00 AM