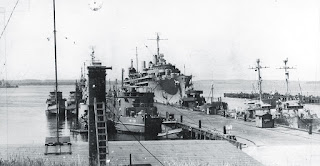 Originally part of Massachusetts, Maine voted to secede in 1820, and as part of the Missouri Compromise became the 23rd state. In addition to its forest and farming industries, the Pine Tree State has a long history of shipbuilding. A major portion of the state's economy during the 18th and 19th centuries was due to its construction of wooden cargo and passenger ships.

When WWII struck it was no surprise that Maine shipyards quickly converted to war craft production and contributed nearly twenty-five percent of the Navy’s big ships by the end of the war. Bath Iron Works and the Portsmouth Naval Shipyard at Kittery produced iron freighters, destroyers, carriers, submarines, and the famous Liberty ships. Smaller yards in Camden and Boothbay manufactured wooden minesweepers and patrol boats. As with other states, women joined the ranks of employment, and ultimately eighteen percent of the shipyards’ workers were female.

Several airfields were built as training bases, one of which is now Bangor International Airport. It is estimated that tens of thousands of soldiers and millions of pounds of cargo left from these airfields to Europe.

The vacancy of thousands of agricultural jobs by men enlisting, being drafted, or choosing to enter one of the lucrative war industries caused Congresswoman Margaret Chase Smith and U.S. Senator Ralph Owen Brewster to petition the U.S. government to place POWs within the state. Finally, in 1944, approximately 4,000 German prisoners of war were allocated to Maine. Housed at four camps (Houlton, Princeton, Seboomook, and Spencer Lake) the men were used on potato farms, logging camps, and in the paper industry.

Few people realize that dozens of German U-Boats patrolled the U.S. east coast during WWII. By June 1942, 171 ships had been torpedoed. As a result of the attacks as well as the news that several foreign agents had managed to land on U.S. soil via Maine, the government increased defenses by creating new forts or expanding existing forts. The remains of many of the batteries can still be seen today.

Minefields and indicator loops designed to magnetically detect subs were installed in the floor of Casco Bay. A mobile artillery unit was then deployed to Biddeford Pool. Observation Towers were constructed, and the coast was patrolled by sub-chaser boats and dirigibles. And, as with the rest of the country windows were covered, lights were doused, and the state shrouded in darkness at night.