Last week I posted a Facebook image about the 6888th Central Postal Directory Battalion, and quite a few people indicated they were unfamiliar with these ladies, so I thought I’d do a bit of research and share it with you.

There were 855 women in the battalion, and they were the only all-black, all female to serve overseas during WWII. Nick-named the six-triple eight, their motto was “no mail, no morale.” According to the battalion’s website, by February 1945 there were millions of pieces of mail stashed in a warehouses in Birmingham, England that should have been distributed to members of the armed forces, Red Cross workers, and U.S. government employees. Incoming letters and parcels added to the massive backlog of Christmas packages and correspondence.

In addition to vague addresses (e.g. “Junior, US Army), the constant movement of troops, and common names (there were 7,500 Robert Smiths alone), mail delivery was difficult at best. One general estimated it would take six months to wade through the mail. 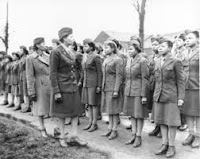 Mary McLeod Bethune (a civil rights activist best known for starting a school for African-American students in Florida) contacted First Lady Eleanor Roosevelt to find out if there was a way Black women could serve overseas and in more meaningful roles. Mrs. Roosevelt succeeded in influencing leaders in the Women’s Air Corp to integrate their ranks, and in 1944 the war department pulled together all the African-American women from the WACs, the Army Air Force, and the Army Services Forces to create the 6888 Battalion.

The women trained at Fort Oglethorpe, Georgia, then traveled to Camp Shanks, New York to be deployed. They were sent over in “batches”, and the first group arrived in Glasgow, Scotland on Valentine’s Day, 1945. The trip across the ocean was dicey, and the ship was forced to dodge German U-boats as they traveled. Transported to Birmingham, they faced unheated and poorly-lit warehouses jammed to the rafters with mail. Rats had helped themselves to rotting food in the packages.

Bundled in long johns and extra layers of clothing, the women worked round-the-clock in eight-hour shifts seven days a week. In order to keep track of servicemen with identical names, over seven million information cards were created that included serial numbers. In addition, battalion members investigated insufficiently addressed items for clues as to how to deliver them. They were also responsible for returning mail to the families of those who had died.

By processing 65,000 per shift, the 6888 cleared the backlog in three months. With their project complete, they were sent to France where they arrived shortly after V-E day. Discovering another two year backlog of mail, the women got to work. Unfortunately, over 200 women were eligible for discharge in January 1946, so the workforce was reduced. The remaining members of the battalion were sent home the following month.

Watch a National Archives Video: https://www.youtube.com/watch?v=8SQgyNfn9uE
Posted by Linda Matchett at 1:30 AM