“The rapid advance of my army through France would have been impossible without the fighting aid of the FFI.”
Four-star General George S. Patton, Jr.

“The help given by the FFI from the Mediterranean landings to the arrival of U.S. troops at Dijon, was equivalent to four full divisions.”
Three-star General Alexander M. Patch

High praise from highly-placed senior officers in the U.S. Army. Who were these men and women? According to an article written by Sgt. Bill Davidson, Yank Staff Correspondent: 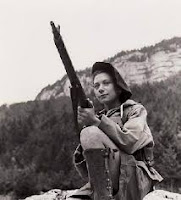 “The French Forces of the Interior, better known as the FFI or the Maquis (from the brush country in which they hide and operate), are not a collection of picturesque hit-and-run guerrillas led by a Hollywood character resembling Errol Flynn. They are a highly-organized, well-disciplined army of some 500,000 French men and women, divided into divisions and regiments, with rifles, mortars, pack artillery and even tanks, and fired with tremendous resolve to re-establish their homeland among the free, respected peoples of the earth.”

He goes on to say, “The Maquis are mostly young, tough-looking guys between the ages of 17 and 25, although there is a good percentage of women and older persons.”

One intriguing anecdote tells of a group of five FFI members who walked into a restaurant, hung their rifles on the hat rack, and sat down to have lunch with their wives. Having just finished a mission that killed some Germans outside the city, they discussed domestic issues with the women, finished their meal, then headed out in a captured German staff car marked with the cross of Lorraine.

Prior to 1942, the FFI was a relatively small and disorganized force. They worked underground, appearing long enough to conduct acts of sabotage and providing intelligence to Allied leaders. By 1944, the group had grown and were unified under the command of French General Marie Pierre Koenig. Absorbed into the French regular forces, the FFI were used as light infantry and continued to use their own weapons and wear civilian clothing with an armband marked “F.F.I.”

As liberation progressed, the FFI took control of bridges and flushed the Germans out of villages and towns all over France. It is estimated the Maquis liberated approximately 50,000 square miles of the country, including Paris. They served as scouts for the Allied armies and slowed down enemy troop movements.

Many members of the FFI are well-known, with streets, bridges, and parks named in their honor, but the majority of this organization slipped back into obscurity after the war and resumed their lives as unassuming men and women.

Love's Rescue releases tomorrow! Pre-order your copy today of this tale of faith and hope inspired by the biblical story of Rahab and set during the liberation of Paris in August 1944. Available for a limited time for only $0.99 from these fine retailers: