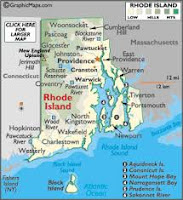 At 1,214 square miles, Rhode Island is the smallest state in the Union. To give you an idea of its size, the state would fit into Alaska (the largest state) 486 times! Delaware is the next smallest state, yet it is more than twice the size of Rhode Island. According to one source, there are at least four cities in the U.S. that are larger than this tiny state.

Despite its size, Rhode Island participated in WWII in a big way. About 92,000 residents served in the war (more than one in ten), and nearly 2,200 of them were killed. The coastline was sealed off to civilians, and the military and civilians patrolled the beaches. Observation and fire control towers were constructed to look like summer cottages. Many Rhode Island fishermen acted as volunteer observers.

With the large amount of water associated with the state (it’s nickname is The Ocean State for a reason!), the Navy had a large presence during the war. An interesting aside is that three future presidents-John F. Kennedy, Richard Nixon, and George H.W. Bush-did some of their training at Rhode Island facilities. 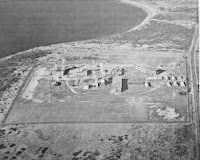 The Northeast’s largest naval air station was located at Quonset Point in Narragansett Bay. This is also the main training center for the Seabees. Newport and Aquidneck Island included multiple torpedo production facilities, a naval training station for nearly half a million sailors, and the nation’s main PT boat training center. There were also three German POW camps in Narragansett and Jamestown. The Providence shipyard produced Liberty ships, and manufacturing plants around the state produced vast amounts of military equipment and munitions.

But a little known fact is that Rhode Island is one of several states that churned out hundreds of inflatable “tanks” that were sent to southeast England in May and June 1944 to mislead the Germans into thinking the real invasion of occupied Europe would take place in Calais (further north of Normandy). 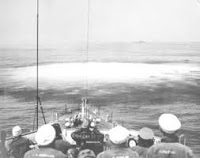 Perhaps another piece of forgotten history is that Rhode Island was the site of the Battle of Point Judith, a naval engagement fought between the U.S. and Germany on May 5 and 6, 1945. During one of the last actions during the Battle of the Atlantic, the German sub U-853 was near the point when she sighted and fired on the SS Black Point (an American-flagged merchant ship), capsizing the craft and sinking it within fifteen minutes. There were destroyers and frigates in Boston Harbor that made their way to Rhode Island to search for the U-boat. Evidence suggests it was sunk between midnight and midday on the 6th.