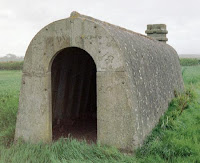 The more I research World War II, the more I realize how easy my everyday life is because of the vast number of modern conveniences now available. Food was made from scratch. Clothing was handmade. (Yes, there were ready-to-wear items in stores, but after rationing began scarcity became a problem.) Cameras came with a manual that explained how to process film, so that even photographs were developed at home.

As discussed in two prior posts, Anderson Shelters and Morrison Shelters were also Do-It-Yourself. Made of steel, the pieces bolted together and were seemingly easy to assemble. I recently discovered Stanton Shelters, another type of air raid shelter that was delivered unassembled. 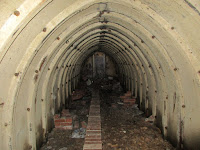 Made of pre-cast steel reinforced concrete segments, the shelters were manufactured at Stanton Ironworks, in Ilkeston, Derbysthire. Highly resistant to shock, the shelters were low cost, and any length could be built by adding more segments, each of which was twenty inches wide. A pair of segments formed a seven-foot high arch and transverse struts were provided to ensure rigidity. The segments were bolted together, then bolted to the adjoining pieces. Joints were sealed with a waterproof compound. Like Anderson Shelters, Stanton Shelters were partially buried into the ground with an entrance.

The manufacturer’s instructions touted the shelter’s ease of assembly, but I can’t imagine trying to wrestle large pieces of concrete into place, then connecting them and slathering the joints with some sort of “goop” to make them impervious to water. I’m skeptical that this was a simple weekend project. The general public may have felt the same way. Only about 100,000 personal Stanton shelters were assembled versus the millions of Anderson and Morrison shelters. However, there are reports of multiple Stanton shelters on company sites around England. 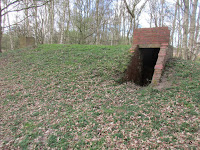 In a BBC interview, Mr. Ashby talked about the mixed blessing of her family’s Stanton shelter. “A couple of benches and an oil lamp made up the furnishings. Dad said we would be safe there.” Apparently his father didn’t consider the weather because it flooded during rainy weather. Fortunately he was correct about its effectiveness. During one air raid the shelter was hit by an incendiary bomb that “hit the roof and bounced off into the garden without detonating.”

Think you could have hauled around bits of concrete to build a shelter?

Set in 1942 and taking place in London, Under Fire tells the story of Ruth Brown, whose missing sister Jane is declared dead. Following clues from her tiny New Hampshire town overseas to England, Ruth stumbles resistance fighters, the IRA, and smugglers, all of whom want her dead for what she has discovered.