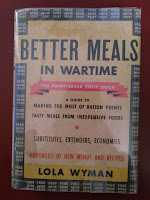 As you may remember, sugar and milk were rationed items that were difficult to get, butter too. So many dessert recipes were fruit based and contained very little sugar. Here is a tasty “Apple Fritter” type recipe from the 1943 Better Meals in Wartime. The recipe calls for fat in an iron skillet, but if you’ve got a Fry Daddy™ or Fry Baby™ that will work even better.

Peel, core, and slice the apples thin, crosswise. You should get six (6) slices from each apple, assuming they are large apples.

Sift the dry ingredients (flour, backing powder, sugar, and salt), and add the beaten eggs and milk. Beat vigorously. Add the melted shortening. Dip each apple slice in the batter.

Melt enough fat or shortening in the frying pan (a heavy iron one is best) to fill 2/3 full. Heat the fat slowly and when a one-inch cube of white bread browns in the fat in exactly 40 seconds the fat is the right temperature for the apple slices. If you use a thermometer it should read 365-375.

Drop in the fritters and fry until puffed and nicely browned. Then drain them on absorbent paper. Serve hot at once with powdered sugar and a bit of some red jelly on each fritter.