Wartime Wednesday: Under Cover of Darkness

Wartime Wednesday: Under Cover of Darkness 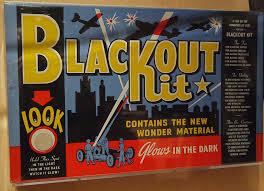 “I stood on the footway of Hungerford bridge across the Thames watching the lights of London go out. The whole great town was lit up like a fairyland, in a dazzle into the sky then one by one, as a switch was pulled, each area went dark, the dazzle becoming a patchwork of lights being snuffed out here and there until a last one remained, and it too went out. What was left us was more than just a wartime blackout, it was a fearful portent of what war was to be. We had not thought that we would have to fight in darkness, or that light would be our enemy.”
So said Daily Herald journalist Mea Allan 1939 when she witnessed Britain's blackout on September 1st, two days before the outbreak of WWII. 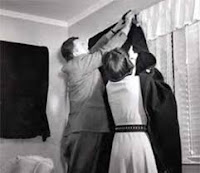 Total darkness overtook the country. The Blackout was absolute, down to the smallest glow of a cigarette. Breaking the blackout brought fines and jail time. Without the aid of lights, nighttime became confusing, frightening, and even dangerous. The number of car accidents spiked, and pedestrians bumped into each other as well as street lamps, telephone booths, and mailboxes. They also fell off curbs into the street or off bridges into rivers or ponds. Sometimes they drowned. Sales of walking sticks, flashlights and batteries shot up.
The British government ensured there was enough Blackout material for everyone-even the poorest folks. By all reports, hanging the material was difficult and time consuming. Many of the window frames were stone or metal, so it was not a simple matter of pinning the material to a wooden frame.

The Blackout was “policed” by the more than 300,000 citizens who volunteered to be trained as Air Raid Precaution (ARP) Wardens. They patrolled the streets, and notified homeowners of any light seepage. It was not uncommon to hear a knock on the door followed by a shout of “Put out that light!”
I live in a small village in New Hampshire where we choose darkness. It is not mandated such as was London’s Blackout. And we have a few streetlamps, just enough to light our way. What a difference that makes. Recently we lost power for several hours. It was a moonless night, and the town was pitch black. We couldn’t see the garage that sits fifty feet from the house, let alone anything down the street. It gave me a bit more understanding of the hardships of the British during the war.
What memories do you have of a dark night or blackout?