I’m visiting my dad this week, so I thought it would be fun to delve into Florida’s association with WWII.

Like many other U.S. states, Florida sprang into action immediately after the attack at Pearl Harbor. Thousands of young men rushed to enlist. As uniformed service became available to women, they signed up too. Eventually, over 250,000 Floridians would serve.

It wasn’t long before the military showed up in force. Because of Florida’s warm climate and vast amounts of vacant land, it was an ideal location for military bases. The number of military installations increased from eight to 175! At 180,000 acres, Camp Blanding became the state’s fourth largest city and housed 55,000 soldiers. Naval stations were reactivated in Key West, Tampa, Valparaiso, and Pensacola. In addition, there were forty airfields that trained pilots and crews, including one in Pensacola where Jimmy Doolittle and his crew trained for their dramatic raid on Japan.

Overcrowding on the bases became a problem, so the military took over hotels and resorts for housing and in some cases, hospitals. With the tourism industry at a crawl during the war, perhaps the facilities were glad to have the business. Three years into the war, Florida became a popular destination for soldiers on furlough.

Shipyards in Tampa, Panama City, Pensacoloa, and Jacksonville produced Liberty ships, and in Dunnedin, amphibious vehicles were designed and manufactured. Even landlocked Orlando built 9,000 assault boats. At one point, Florida considered changing its nickname from The Sunshine State to The Steel State. The citrus industry boomed and surpassed California in production for the first time during the crop year of 1942-43. Shortly thereafter, citrus growers patented the process to make concentrated orange juice. The U.S. Department of Agriculture authorized the temporary importation of 75,000 Bahamians and Jamaicans to work in south Florida fields. 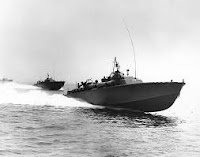 In the early days of the war more than twenty-four ships were sunk off Florida’s Atlantic and Gulf coasts, so the “Mosquito Fleet” (the fast wooden PT boats used by the Navy) was created to patrol Florida’s coastline to help eliminate the threat of submarines. Thousands of volunteers were also trained to keep track of air activity.

Folks on the home front “did their bit” by collecting scrap and holding “money drives” to help build ships and planes. Victory gardens flourished (Tampa officials estimate 10,000 gardens in their city alone), and people learned to do more with less.