Congratulations, Connie Saunders! You are yesterday's winner of Yowza! All the Books! giveaway! You have won an autographed copy of Nancy Farrier's "The Ranchero's Gift." Watch your email for official notification and instructions!

I’ve been scribbling stories since I was seven or eight years old after my folks gave me a notepad and package of pens and told me to write to my heart’s content. They kept me supplied in paper for years. I even published a family newspaper called The Good Times. (Long before self-publishing was a thing. HA!) I stole the New York Times’ motto of “All the News That’s Fit to Print,” and held all the jobs of columnist, weather girl, and editor.

A voracious reader, I was about thirteen years old when I finished A Tree Grows in Brooklyn and decided I wanted to write and publish stories that affected people like her book affected me. College and career got in the way, but after some freelance magazine opportunities came along about fifteen years ago, the passion to write a novel was reignited, so I began to pursue learning the craft and seeking publication.

My favorite childhood books are the Babar and Curious George series. I recently discovered that the Margret and H.A. Rey, authors of the Curious George series were German-born Jews who escaped Paris in 1940 by bicycle. They ended up in America, and their first book was published in 1941.

Because I’m such a history and research geek, my idea of the perfect vacation is anywhere that includes historic sites, especially associated with World War II. My husband has patiently trekked through museums, historical societies, graveyards, forts, encampments, castles, and numerous obscure locations. I was fortunate to visit England in 2015, and we plan to go again in the next couple of years with Bletchley Park and Churchill’s War Rooms on the to-see list.

When I was in college I need to fill an elective course, and I had gotten to know one of the professors of Old Testament fairly well because I attended his church, so I signed up for his class on Jeremiah. (I might have been hoping for an easy A. Not a chance!) Class was too many years ago to count, but I still remember much of what Dr. Garner taught, and my favorite Bible verse is Jeremiah 29:11 “For I know the plans that I have for you,” declares the Lord, “plans for welfare and not for calamity to give you a future and a hope.”

About Linda:
Linda Shenton Matchett is an author, speaker, and history geek. A native of Baltimore, Maryland, she was born a stone’s throw from Fort McHenry and has lived in historic places all her life. Linda is a member of ACFW, RWA, and Sisters in Crime. She is a volunteer docent and archivist at the Wright Museum of WWII where she meets the most interesting people. 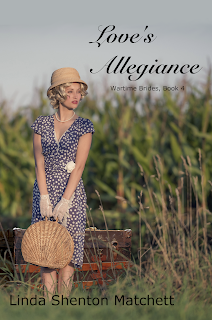 Conscientious Objector Irwin Terrell is looking forward to his assignment at Shady Hills Mental hospital to minister to the less fortunate in lieu of bearing arms. At the arrival of the potential bride his father has selected for him, Irwin’s well-ordered life is turned upside down. And after being left at the altar two years ago, he has no interest in risking romance again.

Your turn!
Visit Linda’s website to be able to answer the following question to be entered into today’s giveaway of Love’s Allegiance releasing Thursday, August 15th. Love’s Allegiance is the last book in my Wartime Brides series. What is the title of Book 1?

a Rafflecopter giveaway
Posted by Linda Matchett at 1:30 AM