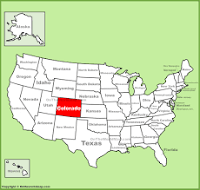 Named for the Colorado River (from the Spanish for Red River), the territory was organized in February, 1861, but Colorado was not given statehood until 1876 by President Grant. Because of the date it was admitted to the Union, Colorado is nicknamed the Centennial State.

As with many of the western United States during WWII, Colorado was home to many army and air force bases. Lowery Field alone trained 57,000 each year to supply the Army Air Forces with bomber crews, armourers, clerk typists, and aerial photographers. Camp Hale, located near Leadville in Eagle Valley, was created specifically to train soldiers in mountain warfare. The idea originated with Charles Dole, president of the National Ski Patrol who had heard about the exploits of the Finnish ski troops in the Russo-Finnish war. Named for Irving G. Hale, a Coloradoan veteran of the Spanish-American War and a founder of the Veterans of Foreign Wars, the camp also served as a dog training and POW camp for German soldiers (one of forty-eight POW camps in the state).

In addition to its military camps, Colorado was the location of a Japanese-American internment camp called Amache that opened in the fall of 1942. At its peak, the camp held more than 7,300 internees who were confined in a one square mile, barbed wire enclosure watched over by armed guards. Nearly 1,000 of the Japanese Americans held at Amache joined the military and fought in the war, thirty-one of whom lost their lives. 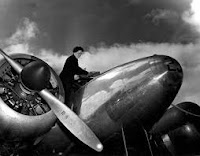 The defense industry also took up residence in the state with Denver being a large home to many of the plants such as Rocky Mountain Arsenal, Remington Arms Co., Colorado Fuel & Iron, and Pueblo Ordnance Depot. Western Cutlery and steel manufacturers received contracts and subcontracts to supply the military. Railroads, trucking companies, and airlines flourishes and oil producers, coal mines, and cement factories boomed. With the need to provide food for the U.S., her troops, as well as her allies, Colorado farmers increased their output.

Colorado also sent her young men and women to serve in uniform, and nearly 3,000 residents gave the ultimate sacrifice.

The Widow & The War Correspondent

Preorder link: https://amzn.to/3d0pQ1h
Posted by Linda Matchett at 1:30 AM