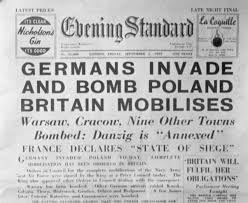 Two days after Germany invaded Poland on September 1, 1939, Britain declared war on the Nazis. A far flung empire that had direct or de facto political and economic control of twenty-five percent of the world’s population, the United Kingdom also held political ties to four semi-independent Dominions: Australia, Canada, South Africa, and New Zealand, as part of the Commonwealth. Did they believe their power would enable them to defeat the Germans in short order?

Unfortunately, victory would not come for another six years.

The first eight months of the war, often referred to as the “Phoney War,” was a time of great optimism (“the war should be over by Christmas”), yet great bureaucratic muddle (as one report called it). Very little in the way of “war” happened. Requirements such as evacuations and blackouts were unpopular with civilians. 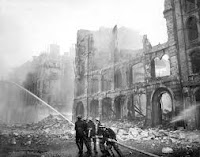 Then, the defeat at Dunkirk was followed by the fall of France in June 1940. War was now a harsh reality. Neville Chamberlain’s government was outed and Winston Churchill replaced him. Firm and resolute, Churchill inspired the British people during their lonely stand against Hitler for the next eighteen months until the U.S. joined the conflict as a result of the attack on Pearl Harbor.

Britain endured the Blitz as well as further attacks from bombs and rockets throughout the war. Over sixty thousand people were killed and nearly ninety thousand seriously injured. Thousands of homes and buildings were damaged or destroyed. Civilians sought in their basements, the subway systems, or structures such as Anderson and Morrison shelters. Rationing of food began in January 1940 and clothes in June 1941. By 1943, nearly every household item was either in short supply or unobtainable. (An interesting note is that boys had to wait until age 12 before being allowed to wear long pants.) 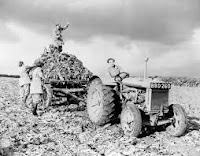 Families were often separated because of evacuation and fathers and husbands going away to fight. Uncertainty and hardship defined each day. Women worked long hours in the defense industry or joined one of the many service organizations to do their bit. The Women’s Land Army planted, maintained, and harvested produce for the country that before the war had imported over half their food.

Despite their exhaustion and hunger, Britons emerged from the war justifiably proud of their role in gaining Allied Victory.

All’s fair in love and war. Or so they say.

High school and college were a nightmare for Doris Strealer and being an adult isn’t much better. Men won’t date a woman of her height, and they don’t understand her desire to repair car engines rather than work as a nurse or a teacher. When her father’s garage closes, and no one will hire a female mechanic, she joins the Red Cross Motor Corps in England, finally feeling at home. Until she comes face to face with her past in the form of Ronald McCann, the most popular boy in school.

On the brink of a successful career as a surgeon, Ron’s plans crumble when he’s drafted and assigned to an evacuation hospital in England, the last place he expects to run into a former schoolmate. The gangly tomboy who was four years behind him in high school has transformed into a statuesque beauty, but a broken engagement in college leaves him with no desire to risk his heart ever again.

Will the hazards of war make or break this unlikely couple?