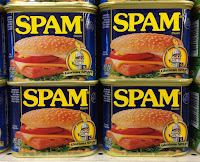 Hormel’s Spam was first produced in 1937, and Ken Daigneau, brother to one of a Hormel executive was awarded $100 for coming up with the name. Alternately loved and despised, Spam became a staple during World War II.

Provided as part of the fifteen million cans of food to troops, Spam became a constant part of a soldier’s diet, often eaten three times per day. The canned meat was used as a B-ration (to be served in rotation with other meats behind the lines overseas and at camps and bases in the U.S.). Often the brunt of jokes, Spam was referred to by GIs as ham that failed the physical, and a meatball without basic training. The product was so prevalent in the Pacific Theater were a long-shelf life was crucial to feeding the vast number of troops, that one camp had the dubious honor of being named Spamville.

One hundred million pounds of Spam were used as a Lend-Lease staple to Russian and European troops as well. Civilians partook of the product as well. In Britain, a 10-ounce tin costs 12 ration points (or 1 shilling/sixpence). Former British Prime Minister Margaret Thatcher later referred to the product as a “war-time delicacy.” She later talked about Boxing Day 1943 during which “we had friends in and  we opened a tin of Spam luncheon meat. We had some lettuce and tomatoes and peaches, so it was Spam and salad.”

Spam was also distributed in Red Cross parcels to prisoners of war in Germany. Reports indicate one can of Spam could be traded for three packs of cigarettes. Advertisements for Spam appeared in newspapers and magazines, and on radio, with the company becoming a main sponsor for the Burns & Allen show in 1940.

In America’s health-conscious society, Spam has been relegated to a side dish, but in Korea, the second largest consumer of the product, the meat is a luxury item and according to one source, is a popular gift especially for the Lunar New Year.

I grew up eating Spam. Mom often served Fried Spam with eggs or pancakes on Sunday nights. I still enjoy the flavor but the high sodium and fat content makes it off limits for me. How do you feel about Spam?

About The Widow & The War Correspondent