Talkshow Thursday:
An Interview with Ruth Brown of Under Ground

Ruth Brown is a small-town reporter who becomes an amateur sleuth as a result of her sister’s murder in Under Fire. When clues point to England, she becomes one of the few certified female war correspondents sent overseas to cover the war. The adventure continues in Under Ground when she stumbles on a twenty-year-old skeleton under her house. Let’s see what she has to say:

LM: Tell us a bit about yourself and how you started your journalistic career.

Ruth: Thanks for having me. I’m front a tiny village in New Hampshire, very near Lake Winnipesaukee in the central part of the state. I have an older brother Chip who is serving in the Army, and my sister worked in the defense industry. I’ve always scribbled down stories and in high school I became editor of the student newspaper. During college, I submitted stories to Mr. Isaacs who runs the paper, and he hired me after I graduated. I covered mostly social events until getting my big break in covering the union negotiations at Coltrain Industries.

LM: What is it like to be a war correspondent?

Ruth: It’s quite an honor. Of the 2,000 reporters who received certification, there are only 127 women who made the cut. Certification acts as kind of a contract between the journalists and the military. We have to follow their rules and submit our stories for censorship, and in exchange they shelter, feed, and transport us and transmit our articles back home. I’m stationed in London which feels a bit like a combat zone with all the bombings.

LM: Most military leaders haven’t allowed the female correspondents allowed into combat zones. How does that make you feel?

Ruth: For me, I’m okay with that. There is enough to cover right here in London. But for gals like Martha Gellhorn, Dickie Chapelle, and Margaret Bourke-White, it’s not enough, so they find ways around the rules and manage to get themselves to the front. There are other women who have traveled with troops into the Asian and African theaters too.

LM: Maybe you’re content in London because of a certain detective inspector?

Ruth: (blushing): Maybe, but that’s all I’m going to say about that.

Ruth: The British people are stalwart. They insist on trying to force normalcy in their lives, so that Hitler’s attempts at terrorizing them are unsuccessful. Women keep the households running as well as holding down jobs. Until the Americans began sending food and supplies, Britain was struggling to feed her citizens. Because the country is an island, a large percentage of their produce used to be imported. They had to become self-sufficient which was challenging in the face of having to manufacture war materiel and frankly, to just stay alive. I’m impressed with these folks in so many ways.

LM: What are some things that surprised you or gave you pause for thought? 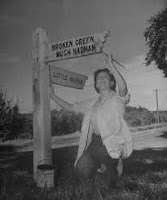 Ruth: When I arrived, most of the street and directional signs had been removed or painted over for fear of invasion by Germany. The British didn’t want them to be able to find places if they did manage to get onto the island. Also, the planning and effort that has gone into saving national treasures such as artwork. I can’t say a lot about it, but most of the artwork has gone into hiding and storage in unusual places.

LM: What else would you like readers to know?