Bordered by North Carolina, the Atlantic Ocean, and Georgia across the Savannah River, South Carolina was the eighth state to ratify the U.S. Constitution in 1788. Less than one hundred years later, the state would be the first state to vote in favor of secession.

As with all states during the 1930s, South Carolina was caught in the throes of the Great Depression. However, prior to the U.S. entry into World War II, federal money began to flow through the construction and expansion of military and naval installations such as Camp Croft in Spartanburg, Fort Jackson in Columbia, and the Charleston Navy Yard.

After the war began, South Carolina’s agricultural sector more than doubled as farmers tried to keep up with wartime demands for cotton and produce. Labor shortages and low wages created challenges for the farmers who ultimately used German POWs as well as members of the Women’s Land Army.

The textile industry also saw a boom as manufacturers geared up to meet wartime needs, such as cotton consumption that increased over sixty percent. Before 1940, heavy industries such as aircraft and ammunition plants did not exist, so manufacturing had to be built. Kline Iron and Steel went into Columbia, and Carolina Industries of Sumter produced ship components that were delivered to Charleston for assembly. 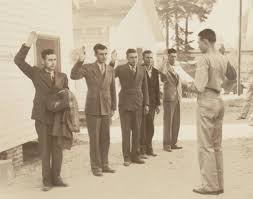 An estimated 900,000 men received their military training in South Carolina, and over 180,000 South Carolinians (including 2,500 women) joined the armed forces. An interesting aside is that forty-one percent of those examined statewide were rejected for service, making the recruit rejection rate in South Carolina the second highest in the nation. Eight hundred posts were “manned” by over 12,500 aircraft spotters, while over a quarter of a million of the state’s residents supported the war effort through volunteerism. South Carolinians joined the rest of the U.S. in rationing from tires and gasoline to vegetables and seafood. By 1943, more than 330,000 Victory gardens dotted the landscape.

The state struggled as segregation laws came under pressure. A huge influx of non-South Carolinians brought different ideas and social customs which led to temporary changes, especially on the military bases. In 1944, the federal district court order the state to provide equal salaries to black and white teacher, and although segregation would remain firmly in place in the early post war period, seeds of change were planted leading to even more court decisions.
_____________________________

Will she get to the bottom of the story before he arrests her for interference?